As a teenager, there are so many things that can distract us from our destination. Here are the 8 things – that helps me as well –  to keep your eyes from distraction and get to the right track.

Disclaimer: I do not own the photo.

1. DREAM AS GIGANTIC AS YOU CAN

Is anything too hard for the Lord? Dreams are the language of God as Paulo Coelho said on his bestselling book, The Alchemist. Don’t just dream, but dream as gigantic as you can. Dreaming big will allow you to stretch your capabilities and push yourself to the limit. And if the Lord sees how genuine your heart towards your dreams, He will help you fulfill your gigantic dreams. Just always remember that fulfilling your dreams is not an overnight process; it is a slowly stream combination of perseverance, hard work, and positive outlook in life.

Don’t just settle on what you learned from your school. Go outside and learn other craft. Go to your local library or explore other places to learn new things. You can also get insight from people who excel on their chosen field. Ask their attitude, skills and habits in that way you can improve yourself and learn from them. You have to be intentional in improving yourself because growth is always intentional. Remember that if you stop learning, you stop growing.

The Lord has given you gifts to use and unlock. Do not believe the enemy that you don’t have any. You possess skills and talent that just need to be discovered and developed. Discover what you love to do and harbor it with diverse passion.

4. LOOK FOR A MENTOR

A mentor is someone who can guide you and lead you to your destination. Find a mentor who would inspire, motivate, and push you to achieve your dreams.

5. CONNECT TO THE RIGHT PEOPLE

Bad company corrupts good character. (1Corinthians 15:33) Choose to connect to people who will bring out the best in you not the worst in you. These people are the ones who would constantly support you and believe on you.

You are never created to be like someone else. God wants to see the distinction between the righteous and the wicked, between those who serve God and those who do not. (Malachi 3:18). Let your life shine upon other people and allow them to see the goodness of God through you.

Strive to get better everyday. We always have something to improve on. Quit your bad habits. Wake up early and make your day productive. It is never too late to improve yourself.

Offer your life fully to God and Serve Him with love and joy. Your service to God is not in vain. Whatever you have planted for the Lord, you will reap it at the proper time more than what you have imagined. So do not lose heart and keep your fire serving Him.

I can’t hide my smile when I saw Granny Gee’s post of grannyscolorful.wordpress.com on Facebook about her book. It was like telling me that hey my  dream is so possible. If you’ve read my about me page, one of my greatest dreams is to write and publish my book. But sometimes, there will come a time when you start to ask and doubt yourself if you could possibly make it. My fear will suddenly paralyze my entire system and block my grooviest urge to pursue my far-fetched dream.

But the moment I saw my Granny Gee’s post, it uplifts my spirit. Hey, she just attested that nothing is really impossible. So I believe, I don’t have to settle for less, ’cause I believe I can go for the best. 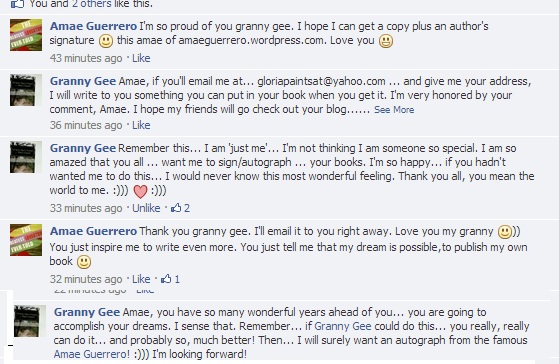 I’m so glad to get to know with Granny Gee. I can’t explain the connection between us even we haven’t seen each other 🙂 I love you Granny Gee.  =)

“Pain and suffering are used to justify the one thing that should bring joy: love” – Maria of Eleven Minutes

Maria, a woman eager to get her life rid of poverty, took another step as she accepted the offer of a man whom she barely knows. Working on a foreign country, Switzerland was the only way she can think to fulfill her dreams.

However, as soon as she reached her destination, she was surprised that what she pictured out from her mind was entirely different from the reality. Yes, she can still accomplish her dreams but she has to let go of herself. It was like gaining what you want at the same time losing what you possess.

Maria, even with a downcast heart, was compelled to become a prostitute. She was already there, on a country in which everything was foreign to her, so going back on her homeland was her last option. And her first and difficult option was to sell her own body.

She was more than willing to fight and offer her body for her dreams. She was willing to let go of herself just to go home with loads of money and a farm for her parents. That was her only goal when she went to Switzerland and worked at the Copacabana as a prostitute. Earning loads of money became her motivation to survive on the filthy industry of prostitution. She made love with different kinds of guys; rich, poor, married, single, young, old and etc. Just name it all. Of course, it was never easy for her but she has to survive and earn money. And falling in love in any guy or her customers she has sexed with was the one of the serious things she’s avoiding.

It was never difficult for her to avoid that, until she met a successful and affluent painter, Ralf hart. It was at their first meeting when Hart told Maria that she has the “light” in which Maria could hardly comprehend. And the moment they got to know more each other, she knew she would do what she was avoiding: to fall in love. She tried to control her emotion with Hart, but she just end up of falling in love with him more.

With this kind of story, the author showed the in-depth side of a prostitute woman. Coelho barred the stereotype of a prostitute as just mere women selling their body for living or for pleasure. He showed the other angle, as how prostitutes just like normal people earning for a living struggle in life and face troubles.

This book is certainly a good material to read. It’s just the matter of being open-minded on certain issue. It may touch one of the sensitive issues of our culture, but it will bring realizations and lesson that you thought you could never know.

I assure you there’s more to this book than sex.

Amae Guerrero is a journalist by profession and has been blogging since she was 14. Aside from her personal blog, she has other blog called heramazingstory.com which seeks to touch people through her amazing stories.